About 40 kilometers (25 miles) from Jerusalem is a massive mound that was once the Biblical city of Lachish. Only Jerusalem was more important in all the cities of the ancient Kingdom of Judah. Bible students are grateful for years of careful archeological study of the site as it has enriched our understanding of important Biblical events like the Assyrian invasion of Judah and the later Babylonian invasion.

Recent work shines a light on another important Biblical event: the religious reforms of King Hezekiah. When Hezekiah was enthroned, the worship of Jehovah, centered around the temple in Jerusalem, had been neglected for decades, certainly during the reign of his own father Ahaz. The Bible describes King Ahaz as a wicked king, who desecrated the temple in Jerusalem and allowed (even promoted) the worship of foreign gods throughout the kingdom. Contrary to the commands of their religious law, the people 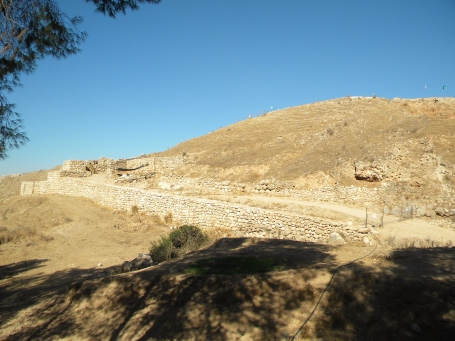 That was the religious situation when Hezekiah took the throne. The Bible describes Hezekiah this way, “He trusted in Jehovah the God of Israel; there was no one like him among all the kings of Judah after him nor among those prior to him.” (1 Kings 18:5) Hezekiah repaired and reopened the Temple. He reorganized the priests and their attendants (the Levites) for sacred worship. He reinstituted the sacred festivals that were called for in the law of Moses and invited the people to come to Jerusalem and celebrate them.

After leaving Jerusalem and encouraged by the example of their King, “all the Israelites who were present went out to the cities of Judah, and they smashed the sacred pillars, cut down the sacred poles, and tore down the high places and the altars throughout Judah and Benjamin, as well as in Ephraim and Manasseh, until they had destroyed them completely, after which all the Israelites returned to their cities, each one to his own possession.” (2 Chronicles 31:1)

Is there evidence to support a large scale destruction of religious sites during the reign of Hezekiah? Quite a bit, it turns out. There is evidence of large cultic centers being deliberately dismantled in the northern Israelite city of Dan during the reign of Hezekiah. At the Israel Museum you can see a large horned alter, dated from the time of Hezekiah, that had been deliberately dismantled and the stones reused as building materials. Other cities show evidence of the same thing.

But new evidence from Lachish, may be the most striking. In recent years a team of archeologists from the Israel Antiquities Authority has been working on the ancient city gates. In September 2016, they revealed their findings.

In Bible times, the city gates were an important hub of activity. The Bible describes the city elders, in effect the city judges, sitting inside the gates of the city. Even kings would take a seat there to make themselves available to their people (2 Samuel 19:8). It was no surprise then that the Lachish archeologists found long stone benches (with arm rests) for the dignitaries to take their seat inside the city gates.

Like many of the cities in Judah and Israel, Lachish had a six-chambered gate. This was designed for the cities defense. At the back of one of the chambers was a narrow room with a further inner chamber. Unlike the rest of the gate chambers, the two inner rooms were plastered on the inside.

In the first chamber archeologists were excited to find two small altars, possibly incense altars, that initially had four raised corners called “horns”. This is significant as the altars used in the Tabernacle and later in the temple at Jerusalem were all built with raised corners. It seems that the Lachish altars were built to imitate the style of those altars. However, on both of the small altars the four “horns” had been deliberately broken off. This seems to have been an attempt to render them unfit for worship. A greater insult to the shrine was found in the innermost chamber.

Inside that chamber, the team found an object that is instantly recognizable to the modern eye. It is carved from a square block and it has a hole carved through the middle. The top of the block has been carved in a way to allow someone to sit comfortably. It is clearly an ancient toilet. What is it doing here? It seems to have been a symbolic act of desecration, a way to render the shrine unfit for sacred purposes forever. In the Bible, the ultimate public dishonor was to have ones house turned into a public privy.

Is that what I think it is?

That is what the fashioners of the stone toilet intended to do to the gate shrine. Dishonor it and the gods that were worshiped there. There is Biblical precedent for this. When the Israelite King Jehu briefly tried eliminating the worship of the pagan god Baal in the northern kingdom, the Bible says he “tore down the sacred pillar of Baal, and they tore down the house of Baal and turned it into latrines, as it remains to this day.” (2 Kings 10: 27)

Ze’ev Elkin, Israeli Minister of Jerusalem Affairs and Minister of Environmental Protection said of the discovery, “Before our very eyes these new finds become the biblical verses themselves and speak in their voice.” All this shows yet again that there is no pooh-poohing Biblical history.*

*Apologies to everyone else who already employed this sad, juvenile pun.

The symbolic toilet at the time of its discovery by archeologists. Photo by Igor Kramerman