Something exciting is happening in the ancient hills of Judah. An archeological dig in progress since 2007 is illuminating a period in history once only known from the Biblical account of King David.

The place is called Khirbet Qeiyafa, an Arabic name that may mean “the place with a wide view”. Israeli archeologists working on the site have given it a Hebrew name meaning the “Elah Fortress”. The site is a hilltop, 30 kilometers southwest of Jerusalem overlooking the famous valley of Elah. That valley is instantly recognizable to Bible readers as the site of one of the most famous battles in history, the battle between the shepherd boy David and the giant Philistine soldier Goliath.

“The Philistines occupied the mountain on one side, and the Israelites occupied the mountain on the other side, with the valley between them.” (1 Samuel 17:3) Neither side was confident of victory and both were reluctant to give up their hilltop high ground positions and engage in battle in the valley.  The stand off continued for 40 days. In the meantime the imposing 2.9 meter (9.5 ft) Goliath, the hulking champion of the Philistine forces, taunted the Israelite forces, daring anyone to engage in man to man combat in the valley. There were no takers.

David “choose five smooth stones from the streambed”. The author in the Valley of Elah.

That is, until a shepherd boy named David, unable to put up with the taunting any more, accepted the challenge. Refusing King Saul’s offer of armor and a sword, David approached the giant with only the weapon of a shepherd, a sling. He “chose five smooth stones from the streambed and placed them in the pouch of his shepherd’s bag, and his sling was in his hand.” (1 Samuel 17:40)

Slings (not to be confused with a slingshot) were used to lethal effect in ancient times and sadly are still used as a weapon of aggression in Israel today by Palestinians and Jewish settlers. One of David’s stones found its mark and sunk into the giants forehead. David finished him off with his own sword and the Israelites, emboldened by this victory, gave chase to the Philistine army, “all the way from the valley to the gates of (the Philistine city of) Ekron, and the slain of the Philistines lay fallen along the road from Shaaraim, as far as (the Philistine cities of) Gath and Ekron.” (1 Samuel 17:52) 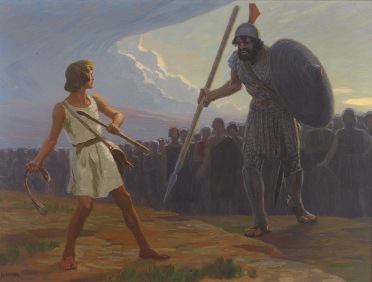 David armed only with a sling and a stone, faces Goliath.

Today the Elah valley contains small farms and vineyards. The road still leads to the coast where the Philistines once built their cities. But in the 10th century B.C.E, the valley of Elah was the front line of a centuries long contest between the Israelites and the Philistines. The Philistines were not Canaanites, but rather sea faring people who, archeology confirms, were originally from Aegean islands like Crete. At the time of David, the Philistines were relative newcomers to the promised land.

Khirbet Qeiyafa, or the Elah Fortress on its  hilltop overlooking the valley road leading to the coast, once held a vitally strategic location. The first questions archeologists ask about the site are, who built it? And what city is it?

Based upon mounting evidence, archeologists have come to the reasonable conclusion that the inhabitants could only have been be the Canaanites, the Philistines or the Israelites. Details uncovered during the dig allow for a solid conclusion to be reached.

The first clue was the layout of the city. The city is round and was built with a massive defensive casement wall, a pair of outer walls with a series of chambers between them. There is a belt of houses abutting the casement wall and incorporating the wall chambers into the homes. According to lead archeologist Professor Yosef Garfinkel of the Hebrew University, the town has a plan,”characteristic of the Kingdom of Judah that is also known from other sites, e.g., Beit Shemesh, Tell en-Nasbeh, Tell Beit Mirsim and Beersheba. …This model is not known from any Canaanite, Philistine or Kingdom of Israel site.”

The second clue has to do with what was not found in the ruins. Then as now, food tells us a great deal about a culture. By carefully examining the contents of ancient refuse pits and even ancient latrines, we can learn about the diet of ancient peoples. At Khirbet Qeiyafa animal bones of sheep, cattle, fish and goats were found, but no pigs. Bible students will understand the significance of this clue. The ancient Israelites had certain dietary restrictions as part of their sacred “Mosaic” law, most famously a prohibition against eating pigs (Leviticus 11: 7,9; Deuteronomy 14:8). By contrast, evidence of the consumption of pigs in the form of pig bones is found in Philistine sites and some Canaanite sites.

The other thing noticeable by its absence is any sort of statue or image of man or animal. This absence, Yosef Garfinkel concludes, “suggest(s) that the population on Khirbet Qeiyafa observed two biblical bans — on pork and on graven images”. This is what you would expect to find at an Israelite city, not at a Philistine or Canaanite city.

The main city gate at the site (more on the gates later) faces, not the coast, not Philistia, but Jerusalem, a days walk away. 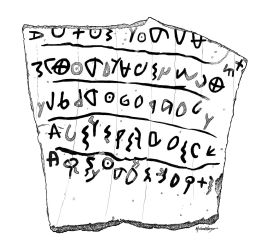 In addition, a broken piece of pottery, the “Khirbet Qeiyafa Ostracon”, (an ostracon is a potsherd used as a writing surface) contains what may be the oldest example of Hebrew writing yet discovered. I won’t describe it in detail here. This find alone is interesting enough to merit its own future article.

In 2012 Garfinkel’s team discovered the broken pieces of a large ceramic jar. When pieced back together it contained the name of its owner, “Eshbaal Ben (son of) Beda”. Previously the name Eshbaal had only been known from the Bible and had never been found on an ancient inscription. The Eshbaal of the Bible (1 Chronicles 8:33; 9:39) is one of the sons of King Saul. Although the Eshbaal of the pottery is a different person, Professor Garfinkel observes: “It is interesting to note that the name Eshbaal appears in the Bible, and now also in the archaeological record, only during the reign of King David.”

All these pieces of evidence have led Garfinkel and many, if not most other, archeologists to conclude that Khirbet Qeiyafa represents an early Israelite city from the 11th and 10th centuries B.C.E. The significance of this I will explain later.

The next question is, if this represents an early Israelite city, which city is it? This is a more difficult question than you may imagine. Iron age cities did not come with handy identifying signage. Indeed, written inscriptions of any kind from this time period are very rare (which is why the aforementioned ostracon is so exciting). So the historian needs to look for clues elsewhere.

The necessary clue may have been hidden in plain sight, in the Bible account of the battle of David and Goliath. The account in 1 Samuel states that after the death of Goliath and the rout of the Philistine army, “the slain of the Philistines lay fallen along the road from Shaaraim, as far as Gath and Ekron.” (1 Samuel 17:52) Gath and Ekron were Philistine cities on the Mediterranean coastal plain. Shaaraim therefore was near the place of battle and evidently in the valley of Elah. Is there a way to be more sure?

Earlier we read that the lead archeologist at Khirbet Qeiyafa, Professor Yosef Garfinkel, had established that the city’s layout plan was in many ways identical to other early Israelite sites and dissimilar from Canaanite or Philistine cities. However, the site does differ in one important respect. The walls of Khirbet Qeiyafa contain two city gates. For a city of its size, this was highly irregular. The city gate was by far the weakest point of a cities defenses. For that reason, there was generally only one city gate and that gate would be heavily fortified.Why does this site have two gates? Professor Garfinkel speculates that perhaps it was an error that was never repeated. This is the only known city in Israel from this time period with two city gates. Why is this significant?  The Hebrew name Shaaraim means, you guessed it, “Two Gates”. It appears that the existence of two city gates was a remarkable enough feature to warrant being memorialized in the city name. For this reason Professor Garfinkel and many other archeologists (though not all) believe that Khirbet Qeiyafa is Biblical Shaaraim.

So what is the significance of this discovery to Bible readers? Bible critics have claimed that, “the figure of King David is about as historical as King Arthur“¹.Readers may recall that it has only been since 1993 that convincing evidence led most (although not all) Bible critics to grudgingly admit to admit that David was a historical figure and not a myth. The “Tel Dan Stele” demonstrated three things. Says Yosef Garfinkel, “There was a David. He was a king. And he founded a dynasty.”² Still, Bible critics called “Biblical Minimalists” (who hold to the view that the Bible cannot be considered reliable evidence for what had happened in ancient Israel and should be read as fiction) claimed that, at most, David was a local tribal leader for an unimportant hilltop town (Jerusalem) and not the king of the united kingdom including Judah and Israel. A king without a kingdom?

In 2005, world renowned Israeli archeologist Eilat Mazar uncovered the remains of a palace in the most ancient part of Jerusalem right where the Bible says King David had his. She has (controversially) identified this as David’s palace. This is not what you would expect of the insignificant tribal leader of an insignificant hilltop town.

The excavations at Khirbet Qeiyafa, or Biblical “Shaaraim” demonstrate that in the time of King Saul and David, there was already a fortified city at a strategic border location of Judah. The Khirbet Qeiyafa Ostracon shows that this was a literate society with scribes. A number of large storage containers discovered in the ruins have been deliberately implanted with a finger mark on the handle. This seems to be an early version of jars discovered at many other later Israelite sites that were impressed on the handle with an acronym meaning, “Belonging to the King”. These jars were probably used for the collection of taxes in the form of various farmed products such as olive oil or grain. This gives evidence that a centrally organized society existed capable of imposing taxes and governmental regulation. In 2013 Garfinkel’s team uncovered a massive public, administrative building in Khirbet Qeiyafa. This supports the conclusion that an extensive civil administration existed during the time of King David. While Jerusalem was the capital and home of the king, Shaaraim was a major administrative center on the western edge of David’s kingdom.

Yosef Garfinkel and other archaeologists conclude that, “It is clear now that David’s kingdom extended beyond Jerusalem, that fortified cities existed in strategic geopolitical locations and that there was an extensive civil administration capable of building cities. The inscription indicates that writing and literacy were present and that historical memories could have been documented and preserved for generations.”³

David’s kingdom was real. This is exactly what a Bible reader would expect. It’s been a tough 20 years for Biblical minimalists.

¹“House of David” Built on Sand: The Sins of the Biblical Maximizers. Philip R. Davies. Published in the “Biblical Archaeological Review”, Jul/Aug 1994

³”An Ending and a Beginning” Yosef Garfinkel, Michael Hasel and Martin Klingbeil. Published in the “Biblical Archaeological Review”, May/June 2011

In the Valley of Elah – Image belongs to the author.