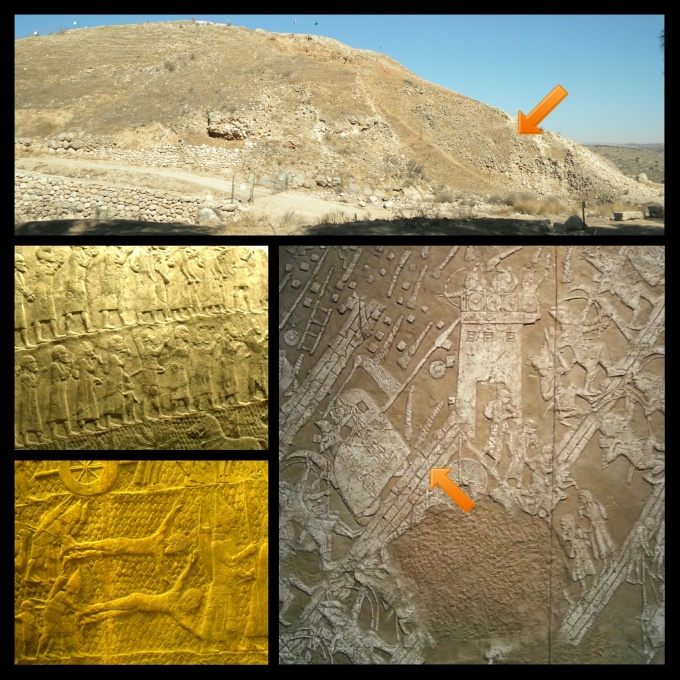 Post 5 – The siege of Lachish (2 Kings 18:13-17). Extensive archeological work has been done at Lachish (Top). Lachish was evidently the second most important city in the kingdom of Judah after the capital Jerusalem. King Sennacherib of Assyria built what he called a “palace without rival” at Nineveh. He decorated the walls with scenes of his greatest triumphs. These can be seen today in the British Museum. One massive wall scene recounts his conquest of Lachish. A large siege engine is seen engaging the city’s defenders on the wall (Bottom right). The siege engine is on a ramp built to attack the city wall (Lower arrow). Remarkably, that siege ramp has been unearthed (Top arrow). Over a thousand arrowheads have been discovered near the top of the ramp, a testament to the fierce fighting that took place there. The city fell, its people were deported into captivity (Middle left). The city’s nobles met a much grislier fate (Lower left). The inscription on the wall reads, “Sennacherib the mighty king, king of Assyria, sitting on the throne of judgement before the city of Lachish: I gave permission for its slaughter.” The palace walls make no mention of Jerusalem. I wonder why? #weeklybiblereadingarcheology #biblereadingarcheology #biblereadingarchaeology