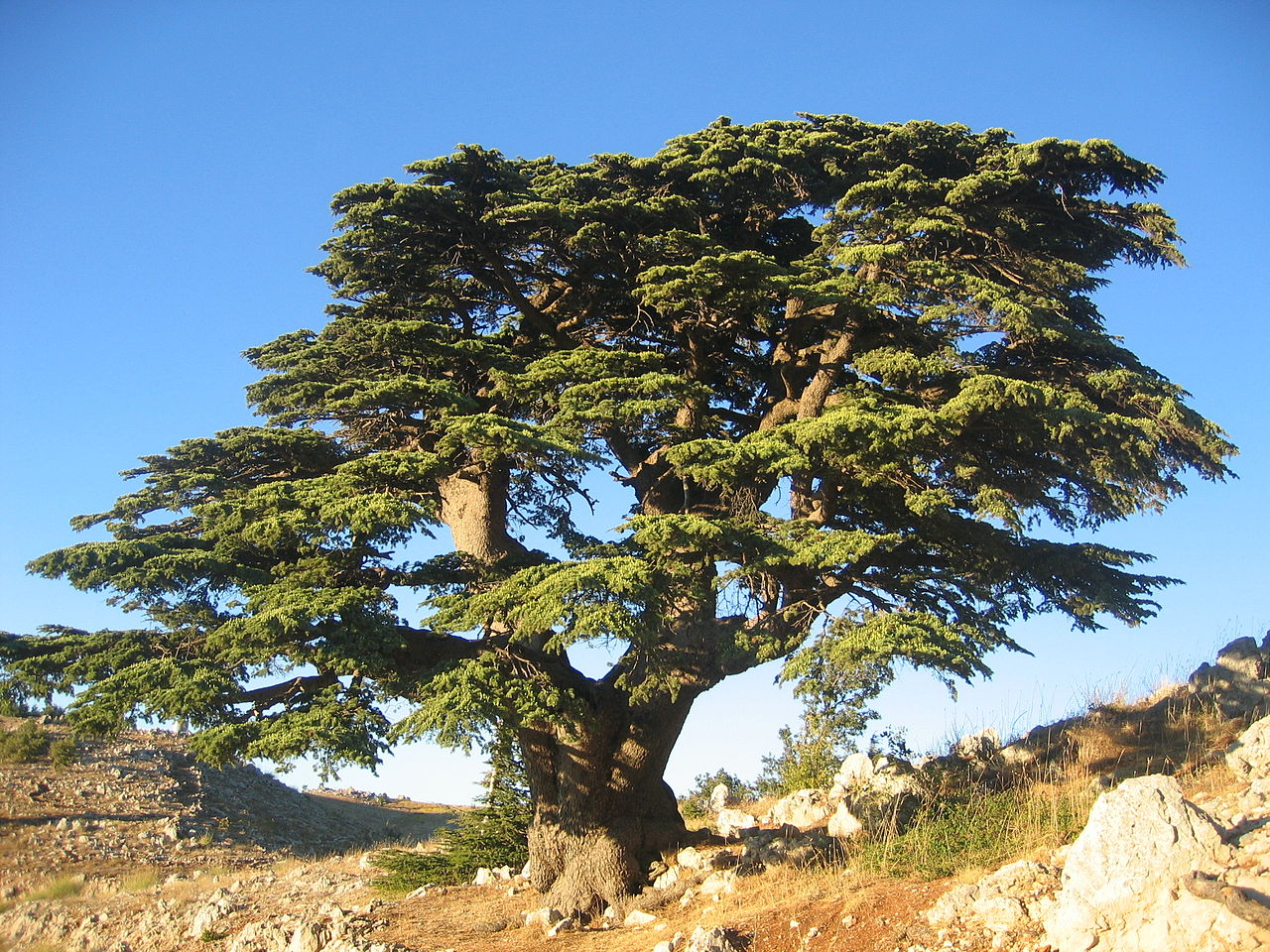 Without doubt, the most sought-after tree of Bible times was the majestic cedar of Lebanon (Cedrus Libani). The Bible mentions the cedar of Lebanon or cedar wood over 70 times! At one time, vast forests of these graceful trees covered the mountains of Lebanon and the eastern Mediterranean region. They can grow at low elevations as well as high, but growing in the rugged  and arid conditions of the Lebanese mountains, contributes to a hardy tree with a reputation for wood that is all but indestructible.

The majestic Lebanon cedar trees grow very slowly and can be very long-lived. They are reported to have grown to the height of 40 meters (130 feet) but modern specimens are commonly around 20 meters (65 feet) in height. They have thick trunks and branches that grow in horizontal rows that decrease in length with each progressive layer towards a broad flattened top. Unlike the familiar red cedar wood of North America, the wood of the Lebanon cedar is lighter in color. The wood has a very pleasing fragrance, making a walk through the Lebanese forest very agreeable. The bark is dark gray and exudes a resin that was used as a preservatent (the Egyptians used it to mummify bodies) and in a range of medical treatments. Modern science has shown that the resin contains antimicrobial properties.

A number of factors made the tree very desirable among the ancient people of the middle east. First, the wood is free from knots which made it ideal for the construction of ships masts. This is even mentioned in the Bible at Ezekiel 27:5, “And they took a cedar from Lebanon to make a mast for you.”

Ancient ship builders also prized Lebanese cedar wood  because it is easily worked and shaped, it ages with little shrinkage and it resists rot or decay in salt water better than most types of wood*. This versatile wood allowed the Phoenician (Canaanite) people of Lebanon to become the one of the worlds first sea-faring nations. The wood allowed them to build seaworthy long-range vessels and gave them something valuable to trade.

How The Cedar Was Used In Bible Times

The Lebanon Cedar’s pleasant appearance, ease of workability, sweet scent and legendary durability made it the most sought after building material in ancient Israel. The Phoenician king Hiram of Tyre supplied King David with cedar and woodworkers to build David a royal palace. David felt guilty that he had such luxurious accommodations while the Ark of the Covenant was still housed in the Tabernacle, the “Tent of Worship”. Said King David, “Here I am living in a house of cedars while the Ark of the true God sits in the midst of tent cloths.” (2 Samuel 7:2). King Solomon later had a royal building constructed which came to be called, “The House of the Forest of Lebanon”, probably so named because it contained 45 pillars of Lebanese cedar (1 Kings 7:1,2). Most famously, Solomon extensively used the cedar of Lebanon in the construction of the magnificent Temple in Jerusalem. Cedar wood was also used in the reconstruction of the Temple and in Herod’s Temple.

The cedar was cut in Lebanon, hauled overland to Tyre and then the logs were fashioned into rafts and floated by sea to the Israelite harbor city of Joppa (Jaffa). Joppa was the only natural harbor from where the Carmel range reaches the sea in northern Israel (in modern-day Haifa) all the way down to Egypt. From Joppa, the logs were hauled overland to Jerusalem. Said King Hiram of Tyre to King Solomon,

“My servants will bring them down from Lebanon to the sea, and I will make them into log rafts to go by sea to the place that you designate to me. I will have them broken up there, and you can carry them away. In exchange, you will provide the food that I request for my household.” (1 Kings 5:9)

An astonishing demonstration of the durability of Lebanese cedar came to light in Jerusalem. On the Temple Mount, where once stood the Temple built by Solomon and later Herod is now the famous and beautiful golden domed Islamic shrine known as the Dome of the Rock. Less well-known but nearly contemporaneous in age is the mosque at the southern end of the Temple Mount called Al-Aqsa. This mosque is highly susceptible to earthquakes and has had to be rebuilt many times. Between 1938 and 1942 the mosque required extensive repairs. The roof was largely dismantled and massive ceiling beams were removed. These were made of the cedar of Lebanon. They were examined by archeologists who could see immediately that these beams were “secondary use” materials, meaning that they gave indications that they had been used as building material more than once. In ancient times, beams of cedar this large would be extremely valuable and would be used again and again whenever possible. The Al-Aqsa mosque dates to the 8th century of our Common Era. Could it be that these beams predate the mosque?

Carbon dating showed that one beam dated to the first century, roughly during the life of the Apostles. Other beams were dated to the 9th century B.C.E, making them approximately 2,800 years old! Evidently these have been in continuous use in large Jerusalem buildings, probably from near the Temple mount during the last 28 centuries! These cedar beams would have survived the destruction of Jerusalem at the hand of the Babylonians and then again centuries later by the Romans and then stayed in use down into modern times.

How The Cedar of Lebanon All But Disappeared

Unfortunately the popularity of the cedar of Lebanon became its undoing. The once vast forests were heavily logged in ancient times. In the 2nd century C.E, the Roman emperor Hadrian (ruled 117-138 C.E) was so alarmed at the Lebanese forest’s depletion he sought to protect what remained by making it an Imperial preserve. But in the following centuries the unsustainable logging continued unabated. In the 19th century, the Ottoman empire used the wood to build railroads and during the First World War, the British and the Turks used what was remaining for the war effort.

Sadly, today only 12 small groves of the once vast cedar forests of Lebanon remain in isolated parts of the mountains of Lebanon. These are now popular tourist destinations. Further stands of the trees exist in Turkey. Fortunately both countries have begun to make serious replanting efforts to try to bring back the ancient forests.

Lebanon has made reforestation a matter of national pride (the cedar of Lebanon is a national symbol of the country and even appears on the national flag.) But these efforts will take many centuries to be successful and serious challenges threaten that success. These include the political volatility of the area, war, the general poverty of the country and now the damaging effects of climate change.

It will be a beautiful thing to see these forests flourishing once more and to walk amongst these fragrant trees. No doubt in the future we will learn to take better care of them!

“But the righteous will flourish like a palm tree And grow big like a cedar in Lebanon.” (Psalm 92:12)

The “Cedars of God” nature preserve, one of the last vestiges of the forests of Lebanon Cedar.

*Footnote: The famous “Jesus Boat” contains Cedar of Lebanon, among other types of wood.

2 thoughts on “The Vanished Cedar Forests of Lebanon”