Post 31 – As many as 7 of Jesus 12 apostles were fishermen who plied their trade on the Sea of Galilee. Many of the most memorable accounts in the 4 gospel books take place on or near that body of water. The Sea of Galilee, is actually a freshwater lake about 21 km long and 13 km wide (it is also called “the Lake of Gennesaret” at Luke 5:1).  The lake is fed by the underground springs but primarily by the upper Jordan River, whose headwaters are found in Mount Hermon (the Golan Heights). The lake is the one significant body of water that Israel, the Palestinian Authority and Jordan all rely on for fresh water and agriculture.

By the winter of 1986, Israel, already a dry country, had experienced several years of drought. The drought had drastically dropped the water level and as a consequence, the shoreline had receded further than any local fisherman could remember. Two fishermen from a kibbutz near Capernaum examined the newly exposed lake bed looking for treasures from the past. Both of them were keen amateur archeologists who had always dreamed of making a significant discovery where they and their family had fished for generations. And one day in January of 1986, they did just that. They discovered something unusual was poking through the mud. Next, they noticed a large oval indentation in the mud. They recognized the shape immediately, it was a buried boat!

The thick silt the boat had settled into had hardened and protected the vessel for centuries. But now, exposed to the fresh air again, the wooden structure would begin to deteriorate quickly. In secrecy so as to protect the site from looters, archeologists went to work to expose and protect the boat. They were pleasantly surprised to find how much had been preserved. Carbon dating and coins found within the boat led the archeologist to date the vessel between 40 BCE and 50 CE. The number of repairs showed the boat had been in continuous use for decades, perhaps as long as a century.

To prevent decomposition the boat was thickly coated in polyurethane foam. Then the excavation pit was flooded with water and for the first time in 2000 years, the ancient boat preserved within its polyurethane foam life jacket floated on the surface! After floating it to shore the boat was taken to a nearby conservation pool in a newly built facility called the Yigal Allon Museum. There the foam was stripped away and the boat began a 14 year process of cleaning, preserving and strengthening. Finally the boat was ready for display and it may be seen today in that wonderful little exhibit on the shore of Sea of Galilee. 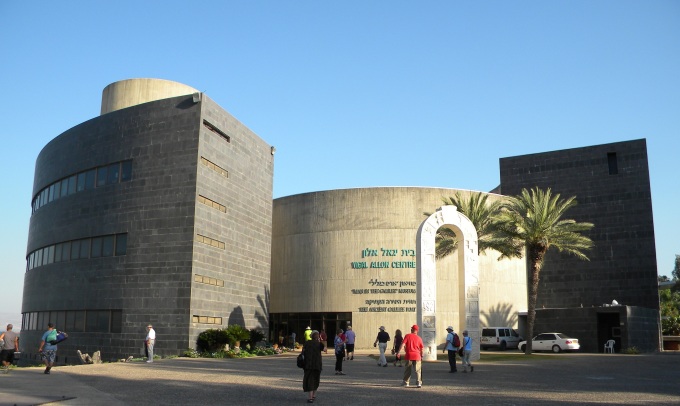 No one seriously suggests that Jesus or his disciples owned or even operated the “Jesus Boat”. A more accurate name for it is “the Sea of Galilee boat”. So what then, is the significance to Bible students? For the first time, we have an example of the sort of boat that was being used to fish in Galilee while Jesus was conducting his great Galilean ministry. The gospel accounts are replete with stories of Jesus and his apostles fishing or sailing on the Sea of Galilee. A study of the boat makes those stories come alive.

The boat was just over 8 m long and 3.2 m wide. Although the upper part of the boat has disappeared over time it would have originally stood 1.2 m tall and it had a relatively flat bottom which would allow it to be operated very close to shore. It would have been fitted with a solitary mast and it contained 4 staggered oars for rowing. This means the boat would have needed a minimum crew of 5, 4 for rowing and one helmsman. However, the boat could have held many more crew for casting and hauling nets or performing other duties. When Peter and 6 other of the disciples decide to go fishing after Jesus death, they encounter a man who calls to them from the shore, “Cast the net on the right side of the boat” (John 21:2-8).  They comply but the net is immediately so full of fish* that they are unable to haul it back in. Only then do they recognize the man on the beach as the resurrected Jesus. Peter immediately swims to Jesus but the others bring the “small boat” to shore dragging the net full of fish behind them. It is easy to imagine a boat like the “Galilee boat” being used by the disciples in this account.

The Galilee boat at one time had a stern deck which allowed storage of fishing nets under its planks. It had the added benefit of allowing a place were exhausted fisherman could find some seclusion to get rest. This is most likely where Jesus was “in the stern, sleeping on the pillow”, when the disciples feared for their lives from a sudden storm (Mark 4:38). Scholars suggest the pillow was a large sandbag used for ballast that was stored under the stern deck.

The boat is primarily constructed out of cedar with an oak frame. However 10 other types of wood were used to repair the vessel at various times. This seems to indicate that the fisherman who owned it was unable to afford the right materials and used whatever other materials may have been on hand. All 12 types of trees grow around the little museum on the shores of Galilee that contain this special boat.

*The most famous commercial fish caught in Galilee are known today as St. Peter’s Fish,  a form of Tilapia. Barbel, a type of carp as well as sardines are also caught there.