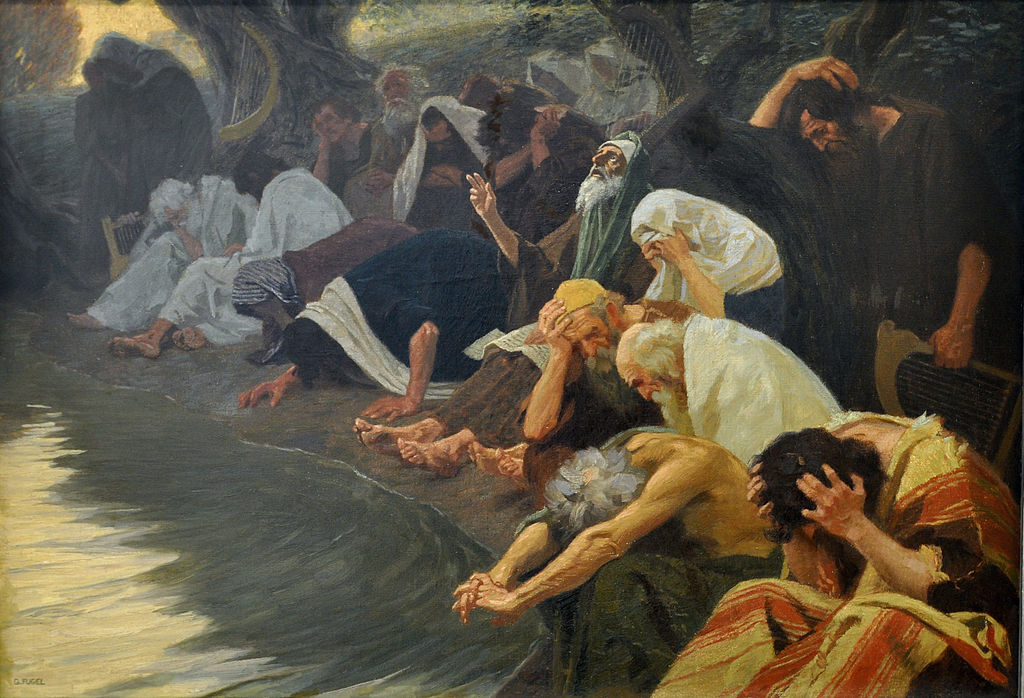 As recently as last year, I heard an archeologist refer to the “so-called Babylonian exile”. For decades there have been those who argue that the Bible exaggerates the extent of the exile. These would argue that the exile consisted largely of the King Jehoiachin, his  royal family, select others of noble birth and talented tradesmen. The prophet Daniel and his three faithful companions would have been taken to Babylon at this time. (Daniel 1: 1-7) This limited exile took place during the first Babylonian invasion.

“In the third year of the kingship of King Jehoiakim of Judah, King Nebuchadnezzar of Babylon came to Jerusalem and besieged it. In time Jehovah gave King Jehoiakim of Judah into his hand…Then the king ordered Ashpenaz his chief court official to bring some of the Israelites, including those of royal and noble descent…Now among them were some from the tribe of Judah: Daniel, Hananiah, Mishael, and Azariah.” (Daniel 1 :1-7)

This first invasion did not result in the total destruction of Jerusalem or the kingdom of Judah. Although King Jehoiachin was deposed, his uncle Zedekiah was placed on the throne by Babylonian King Nebuchadnezzar after taking an oath to be a loyal vassal king. Nine years later, Zedekiah broke his oath and rebelled against Babylon. This oath is the covenant that the prophet Ezekiel refers to when he says, “Can he break the covenant and still escape?” (Ezekiel 17:15)

He did not escape. King Nebuchadnezzar returned to Jerusalem with his military forces and laid siege to Jerusalem. The siege lasted 18 months, during which the people of Jerusalem suffered terribly from hunger and want. When the walls of Jerusalem are broken through, King Zedekiah and his household flee the fallen city. They don’t get far and are caught near Jericho where Zedekiah’s sons are slaughtered before him and his eyes are put out. He dies a broken man in a Babylonian prison.

After the fall of Jerusalem the Bible describes how the population is led captive into exile by the Babylonian chief of the guard,

“Nebuzaradan the chief of the guard took into exile to Babylon the rest of the people who were left in the city, the deserters who had defected to him, and anyone who remained. But Nebuzaradan the chief of the guard left in the land of Judah some of the poorest people, those who had nothing at all. On that day he also gave them vineyards and fields to work.” (Jeremiah 39: 9,10)

A small remnant of “the poorest people” are left in place to serve as agricultural laborers. A governor, Gedaliah, is appointed over them. Seven months later, Gedaliah is assassinated and anyone remaining in the land, “from small to great” fearing Babylonian reprisals, flees to Egypt (2 Kings 25: 25,26). The land of Judah is now desolate and

Some of the Al Yahuda tablets at the Bible Lands Museum, Jerusalem.

empty, the capital city Jerusalem is in ruins and the famous Temple is no more.

If there was a large-scale deportation of exiles from Judah to the land of Babylon, archeologists might look to find two things. First, one would expect to find no evidence of continued habitation in the land of Judah for decades. This is very difficult to prove because as is often said, absence of evidence is not evidence of absence.

The second thing archeologists might expect to find is evidence of Jewish exiles in Babylonia. According to the Bible, the deported Jewish population was to live in exile for 70 years. During that time, a generation would pass and a new one that had never known life anywhere other than in Babylonia would emerge. Speaking to the exiles, the prophet Jeremiah encouraged them to accept their situation and to take measures to ensure that they would not only survive, but proper.

“This is what Jehovah of armies, the God of Israel, says to all the exiled people, whom I have caused to go into exile from Jerusalem to Babylon, ‘Build houses and live in them. Plant gardens and eat their fruit. Take wives and have sons and daughters; take wives for your sons and give your daughters in marriage, so that they too may have sons and daughters. Become many there, and do not decrease. And seek the peace of the city to which I have exiled you, and pray in its behalf to Jehovah, for in its peace you will have peace.” (Jeremiah 29: 4-7)

Is there evidence for large communities of Jewish people dwelling in Babylonia over multiple generations? A number of records have come to light over the last hundred years indicating that a large Jewish diaspora existed throughout the Persian empire and the logical origin for that diaspora was the Babylonian exile. Perhaps the most dramatic evidence for large-scale Jewish exile communities in Babylonia was seen by the public for the first time only recently.

In 2015 the Bible Lands Museum in Jerusalem displayed a collection of cuneiform tablets. This collection is called the Al-Yahudu archive and is composed of about 200 separate clay tablets. Although the authenticity of the tablets are unchallenged, the archive is unprovenanced, meaning they were not discovered in a proper archeological dig but rather surfaced in the massive illegal black market for archeological artefacts. 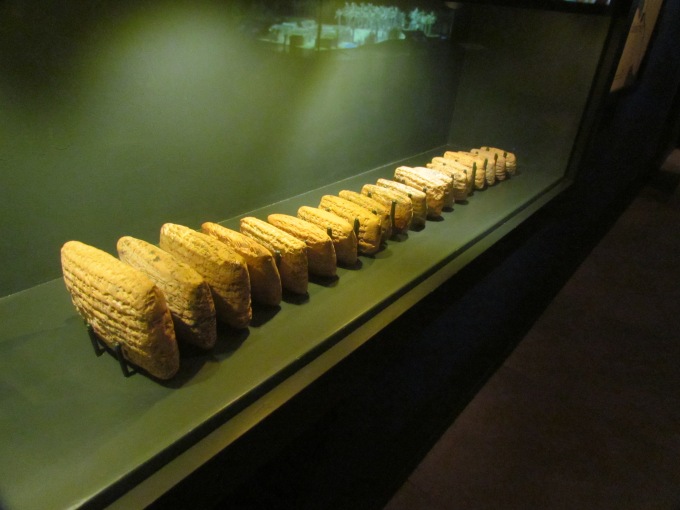 Some of the Al Yahuda tablets at the Bible Lands Museum, Jerusalem.

The black market in ancient artefacts has always existed, but especially since the overthrow of the Saddam Hussein regime in Iraq and its chaotic aftermath has the unlicensed and unscientific looting of Mesopotamian archeological sites become so widespread. In more recent years we have witnessed the wilful destruction of historic sites for religious and ideological reasons by the so-called Islamic State. The same group has also conducted large-scale looting of historic sites to sell artefacts on the black market to finance their operation.

Since the Al-Yahudu archive was purchased on the black market we cannot be sure of exactly where it was discovered. Information like this is often lost forever when a site is plundered. Still the archive tells an important story and it is one that illuminates a chapter in Jewish history that until now has mainly been known through the pages of the Bible.

The archive is composed primarily of administrative and legal documents from a previously unknown settlement called “Al-Yahudu” or “Judahtown” (alternatively, the City of the Jews). The name of the town confirms that the population was primarily composed of Jews. Some of the other towns mentioned in the archive are named after Semitic or Hebrew people.

One of the towns mentioned is of immediate interest to Bible students. The town is called Nar-Kabara which translates to, “the town of the river Kabara”. Kabara is from the Babylonian word Kebar, rendered in the Bible as Chebar. Where have we heard that before? The book of Ezekiel opens with the words,

“In the 30th year, on the fifth day of the fourth month, while I was among the exiled people by the river Chebar, the heavens were opened and I began to see visions of God.” (Ezekiel 1:1)

The Babylonian word for river can also mean “canal” and the accepted meaning of “Chebar” is “the Grand Canal”. Apparently Jewish exile communities including one called Tel-Abib (Ezekiel 3:15) were situated near this canal. It seems likely that the Chebar of Ezekiel and the river Kabara from the Al-Yahuda archive refer to the same thing.

The documents in the archive detail business transactions among the communities that span almost the entire length of time between the beginning of the Jewish exile in Babylonia through to the Persian kings who ruled after Babylon fell to Cyrus the Great of Persia. They even trace the business history of one Jewish family over 4 generations. The evidence these documents reveal is that at least some of the Jewish exile families prospered and even became wealthy while in captivity.

The overall picture the archive paints, is that the Jews were not mere slaves pressed into forced labour on projects in which they had no stake. King Nebuchadnezzar of Babylon’s policy with populations he had forcibly displaced was more sophisticated. The archives show that the deportees were settled in abandoned or newly created towns in the countryside. There, the deportees worked to cultivate previously unused land and in return for the taxes they would pay and the military service they would provide as part of their obligation to their new Babylonian ruler, they received land and the opportunity to make a profit. So successful were many of the exiled families that some passed up the opportunity to return to their homeland when the 70 years of enforced exile had passed. Instead many choose to stay in the only homes they had ever known and where they had become wealthy and comfortable.

Decades later during the reign of Persian King Xerxes I (called Ahasuerus in the Bible), it was said of the Jews that they had communities all across the Persian empire (Esther 3: 8) which at that time stretched from Ethiopia all the way to the border of India. The origin of this Jewish diaspora is found in the Babylonian exile.

There can be no question that a large-scale deportation of Jewish people took place during the reign of Nebuchadnezzar. Nor can there be any doubt that Jewish communities lived for generations in new communities throughout Babylonia. The Al-Yaduda archive provides strong archeological support for the Biblical account.

“By the rivers of Babylon” painting by Gebhard Fugel, circa 1920. {PD} Source: Wikimedia Commons

One thought on “The Babylonian Invasion in Archeology – Part 3: Exile”