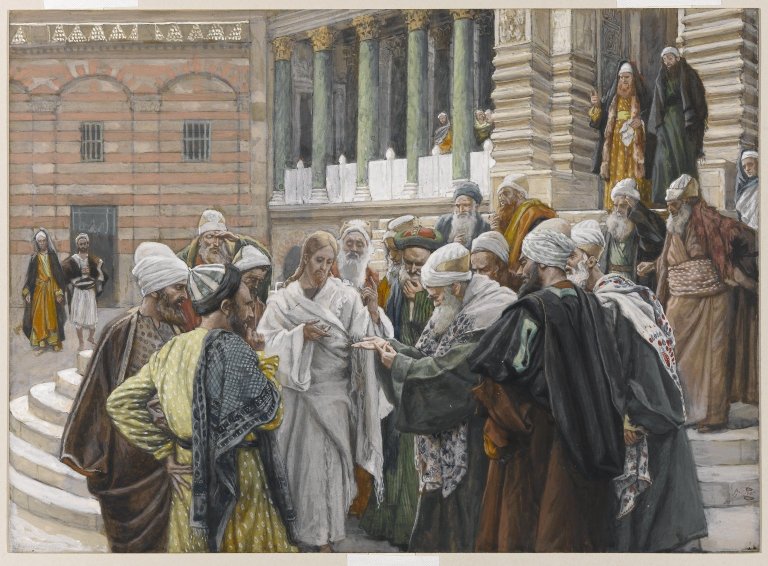 Note from the editor: I am delighted to introduce to our readers an article by a special guest contributor! Jay Grande is a friend of the website, an avid Roman history enthusiast and a Biblical numismatist (specialist in the study of coins). Enjoy this in-depth look at the most famous coin in the Bible!

Next they sent to him some of the Pharisees and of the party followers of Herod in order to catch him in his speech. On arriving, these said to him: “Teacher, we know you are truthful and you do not seek anyone’s favor, for you do not look at the outward appearance of people, but you teach the way of God in line with truth. Is it lawful to pay head tax to Caesar or not?  Should we pay, or should we not pay?” Detecting their hypocrisy, he said to them: “Why do you put me to the test? Bring me a denarius to look at.”  They brought one, and he said to them: “Whose image and inscription is this?” They said to him: “Caesar’s.”  Jesus then said: “Pay back Caesar’s things to Caesar, but God’s things to God.” (Mark 12:13-17)

There has been much debate amongst numismatists and historians about the above passage.  There are many theories about which Caesar’s image was on the coin and also which denomination of coin was brought to Jesus.  What’s all the fuss about?  Let’s look a little closer and examine the evidence.

The coin commonly thought to be the one brought to Jesus is the so-called Tribute Penny of Tiberius.  It’s believed to be the coin because Tiberius was Emperor during Jesus ministry.  Why is it called a “penny”?  The original Greek text does indeed call it a denarius.  However, when John Wycliffe was translating the New Testament into English in the 1480’s he translated the Roman silver denarius as “Penny” which at the time was the current silver coin in circulation.  In fact, it was about the same size as a Roman denarius and held approximately the same value.  You may also know it as a Pence.  Since Wycliffe’s translation was the basis for many subsequent English translations, the term “Tribute Penny” became the common way to describe the coin Jesus asked for.  But was it specifically a denarius of Tiberius?

By the time of Jesus ministry and his calling for the coin there had been three Caesars: Julius Caesar, his adopted son Octavian, later known as Augustus, and Augustus’ adopted son Tiberius. So, it is possible that the coin could have had any one of these men’s image since all three bore the name “Caesar”.  Some numismatists will argue that it must have been a coin of either Julius Caesar or Augustus but not of Tiberius.  The argument is that denarii weren’t circulated in the east but were mainly used in Italy and the West.  The Eastern Provinces used the Greek standard of drachms and tetradrachms.  They speculate that it would take years or even decades for denarii to make their way to Judea and the east.  This they claim, would make it unlikely that Jesus would receive a coin of Tiberius.  They also claim that Mark wrote for a Roman audience and thus changed the denomination of the coin from either a tetradrachm or drachm to a denarius.  On the surface, this may seem to make sense.  However, Mark later on at chapter 12:42 uses the correct monetary term of “two lepta” (eastern Judean coins) and then explains for his Roman readers “which is a quadrans”.  So, it’s clear Mark doesn’t change denominations for his Roman readers.  The coin Jesus called for is a denarius. But who’s image and inscription is on that denarius?  Let’s look at the three contenders.

Julius Caesar was assassinated in 44 BC so his last coin minted would be about 90 years old by the time of Jesus ministry.  This would definitely give them enough time to make their way to the Eastern Provinces and we know they still circulated during the first century.  However, they were becoming scarcer as the weight and purity standards for silver coins gradually declined.  These coins were melted down and re-struck at the lower standard thus making the Empire a profit.  Still, there were enough in circulation so that the denarius of Julius Caesar is a contender for the Tribute Penny.

Our second candidate is Augustus.  Augustus minted many types of denarii over his reign.  The most common type is the denarius with Gaius and Lucius on the reverse.  They were minted in huge quantities and would have had enough time to make their way to Judea by means of trade or soldiers heading east. Augustus ruled for decades after the civil war with Antony and was the Caesar at the time of Jesus birth.  He died in the year 14 AD.  The coin below has been described as the “alternate” Tribute Penny.

What about Tiberius?  Tiberius was very conservative with his coinage.  There are very few types of reverse designs on his denarii but one is extremely common.  This type spanned his entire reign and is impossible to pin down to a specific date.  Usually the coinage can be dated almost to the day by the titles that appear in the legends.  However, Tiberius didn’t accept many titles and honours during his reign, making dating difficult. The only certainty is that they were minted after 16 AD.  As was mentioned this type is very common and has been chosen by ancient coin dealers as the Tribute Penny that was handed to Jesus.  But was it?

The accounts in Mark and Matthew are not about numismatics, or the Roman monetary system.   It’s a lesson about Paying back “Caesar’s things to Caesar but God’s things to God.”  Yet in that very statement we get the answer.  Jesus asked “Who’s image and inscription are on the coin?”  The answer?  “Caesar’s”. Jesus then tells them to “Pay back Caesar’s things to Caesar.” Julius Caesar and Augustus were dead.  Can someone “pay back” to a person who is already dead?  Remember, Jesus was talking to the Pharisees and the “party followers of Herod.”  These followers of Herod were loyal to Rome.  They were trying to trap Jesus in order to hand him over to the Roman authorities.  For the lesson to really drive home the point the coin must have been a denarius of the current Emperor Tiberius.

Denarii of Tiberius were not unheard of in the east or even specifically in Jerusalem.  They are still found in Israel today.  After all, soldiers, officials and merchants travelled all around the Empire taking their coinage with them.  Leaving Rome, a traveller could reach Jerusalem by boat in a few days and it would only take a few weeks by road.  The whole point of the money changers in the temple was to exchange foreign currency.  Jesus didn’t need thousands of Tiberius’ denarii circulating in the east to make his point, he only needed one!

(1). In February of 44 BC Julius Caesar was declared by the senate “Dictator for Life”.  The office of Dictator was used previously only in times of dire need and only for a very short specific length of time (usually 6 months).  This allowed the Dictator to pass necessary laws or take charge of the military without having to go through the Senate.  The coin above was struck to commemorate Caesar’s perpetual dictatorship (CASESAR DICT PERPETVO) and was the first time a living person’s image appeared on a Roman coin.  This coin has been called “The coin that killed Caesar” as it upset the sensibilities of the Senate who not only frowned on his image being on a coin but also his turning into a “King” in all but name.

(2).  Octavian was Julius Caesar’s great nephew who inherited not only Julius Caesar’s fortune but perhaps more importantly his name.  After Julius Caesar’s assassination and the ensuing Civil Wars, first against Brutus and Cassius and then against Mark Antony, Octavian found himself sole ruler of the Roman world.  On January 16, 27 BC the Senate gave him the honorific title of Augustus.  However, he had a problem.  He had no male heirs.  So, he followed Julius Caesar’s example and he adopted his daughter Julia’s children Gaius and Lucius. It was not to be as both Gaius and Lucius died before he did. The coin above declares him CAESAR AVGVSTVS DIVI PATER PATRIAE or Caesar Augustus the divine, father of the country.  The reverse reads C L CAESARES AVGVSTI F COS DESIG PRINC IVVENT meaning Gaius and Lucius Caesar, sons of Augustus, Designated Consuls, Princes of the Youth.

(3). Tiberius was Augustus’ last pick for a successor.  However, with advancing age and with no other choice he made his step-son Tiberius his heir.  Tiberius was the son of Augustus long time wife Livia.  She was actually pregnant with Tiberius when Augustus married her.  He was a well respected General and knew his way around a battlefield but had trouble navigating the political scene in Rome.  He declined many honors voted to him by the Senate making the dating of his coinage somewhat difficult.  The above coin pronounces him TI CAESAR DIVI AVG F AVGVSTVS, Tiberius Caesar son of the divine Augustus.  The reverse tells of his title as PONTIFEX MAXIM or head Priest of the Roman religion.  Previously this was a post held by a member of the patrician class and held for life.  After Augustus it became the sole ownership of the Emperor’s.

Coins and coin images from the J. Grande collection.