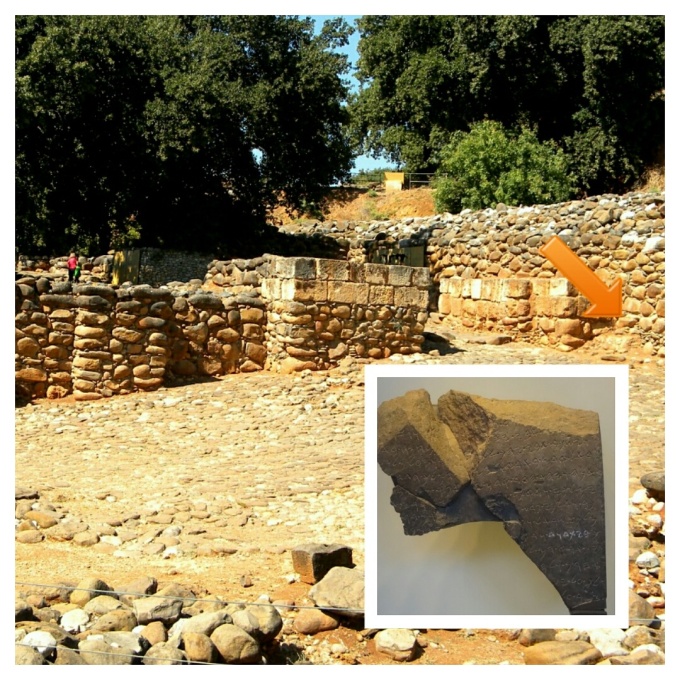 It may not look impressive, but this broken monument at the Israel Museum called the “Tel Dan Stele” (inset) is considered by some to be the most important find in Biblical archeology in decades.

The fragments that make up this memorial (or “stele”) were discovered near the city gate of ancient Dan (arrow) in 1993 and 1994. Dan was a city in northern Israel near the border of modern Lebanon and Syria. The stele mentions a number of kings from the Bible including kings from both the kingdom of Judah and Israel. The inscription is in Aramaic and commemorates the victory of a certain Syrian king that is almost certainly Hazael. The inscription boasts of defeating and killing both “Jehoram son of Ahab king of Israel, and I killed Ahaziahu son of Jehoram king of the House of David“. Jehoram the king of the northern kingdom of Israel was the son of King Ahaz and Queen Jezebel. Ahaziah the king of the southern kingdom of Judah was the son of Jehoram (not the same Jehoram who ruled the northern kingdom) and Queen Athaliah and he ruled as king for only one year. Jehoram of Israel was Ahaziah’s maternal uncle (which made Ahaz and Jezebel his grandparents). The Bible recounts the circumstances of their deaths somewhat differently than the stele.

The Deaths of Jehoram and Ahaziah

The Bible account agrees that Ahaziah joined Jehoram in battle against Hazael the Syrian (2 Kings 8: 28). Jehoram is seriously injured in battle and retreats to Jezreel to recover from his wounds. On hearing of his uncles injuries, Ahaziah travelled to Jezreel to visit him. Meanwhile, one of Israel’s military commanders, a man named Jehu was anointed by the prophet Elisha to rule as king over the northern kingdom of Israel instead of  Jehoram. After his annointing, Jehu and his army drove their war chariots furiously to Jezreel where they met Jehoram and Ahaziah. Jehoram was stuck down right away by an arrow shot by Jehu. Ahaziah managed to escape and attempted to flee back to Jerusalem. He never made it back before Jehu’s men caught up with him in Samaria. Although he managed to escape a second time, Ahaziah was mortally wounded and died of his injuries at Megiddo. Thus Jehoram and Ahaziah died not at the hand of Hazael but at the hand of Jehu. On the Tel Dan Stele, Hazael exaggerates the extent of his victories (which was quite a common thing to do on ancient victory monuments). Or Hazael may have simply believed that as he initiated the series of events that led to the violent deaths of his foes Jehoram and Ahaziah, he could justly boast of having killed them.

The most remarkable thing about the Tel Dan Stele is the reference to the “House of David”. A sequence of rulers from the same family is referred to as a “House”. Up until very recently Bible critics have always taught that King David never existed! The reference on the stele shows that the Syrian’s never doubted that the kings of Judah were descended from David. Since 1994 further references to David have been discovered on the Moabite Stone (it had previously been mistranslated) and on a temple wall in Egypt (Temple of Amun, Karnak). Clearly if the enemy nations around Israel never believed that David was mythical figure, there is no reason for Bible critics today to hold that view. Today almost all historians have grudgingly accepted that David was an authentic historical figure.