Read Part 1 Here. For reasons explained in part 1, the monument in Jerusalem that has been popularly called for centuries “Absalom’s Tomb”, is not connected with him in any way. So if it didn’t belong to Absalom, who did it belong to? The original occupant of the tomb remains a mystery, but a theory proposed in 2013 by a world renowned Israeli archeologist offers a very plausible answer. Dr. Gabriel Barkay proposes that the monument did not belong to Absalom, but it did likely belong to someone else well familiar to Bible students.

A clue to solving the mystery may have been discovered approximately 12 kilometres from Jerusalem, on the edge of the Judaean desert. Rising from the plain is a volcano shaped mountain that the local Palestinians call the “Mountain of Paradise”.

Closer inspection reveals that the mountain was largely man-made. The original hill was more than doubled in size and the summit was crowned with a circular fortress, ringed with towers. Inside the fortress was a pleasure palace. The original name of the fortress/palace was Herodium named after it’s builder the notorious Herod the Great.

Herod the Great is most widely known to Bible students as the slayer of the innocents of Bethlehem. He was a man so paranoid that he ordered the murder of every male child under the age of 2 years in the Bethlehem area because he feared one of them may have been the Messiah (Matthew 2:16). Although secular history does not record that event, it is entirely in keeping with what we know of his character. This is a man who had his once favourite wife and three of his own sons put to death because he suspected them of treason. Augustus Caesar is said to have said that, “It is better to be Herod’s pig than son.” The joke being that Herod, although hardly a pious Jew, would never touch the flesh of a pig.

Herodium from the air.

The famous first century Jewish historian Josephus records that as Herod lay dying he was so concerned that the Jews would not lament his death that he ordered that a large number of the nations most prominent men be arrested. He directed his soldiers that upon his death these same prominent men were to be executed so that the nations mourning after his passing would be genuine! Fortunately for the prominent men, the order was never fulfilled.

Although a paranoid monster, Herod the Great was also the greatest builder in the history of the nation since King Solomon. His building projects still cause wonder, the mountain-top fortress of Masada, the artificial harbor at Caesarea Maritima, Herodium and most importantly the reconstruction and expansion of the Temple of Jerusalem. Josephus makes it clear that King Herod was buried at Herodium, but the precise location proved elusive for many years.

The Discovery Of The Tomb of Herod

In 2007, after 3 decades of searching, famous Israeli archeologist Ehud Netzer of the Hebrew University of Jerusalem announced success. On the side of the mountain, he had discovered the ruins of a once monumental structure along with fragments from 3 ornate stone sarcophagi.

Herod’s sarcophagus at the Israel Museum.

Netzer believed he had found the long-lost tomb of Herod the Great where he was interred along with the two of his wives. The site had been occupied by Jewish zealots during the rebellion against Rome from 66-70 CE. Even decades after the death of Herod, the Jews bitterly remembered his tyranny and maintained their hatred for him. They smashed his tomb and the three stone sarcophagi inside into tiny pieces to express their disrespect. With great skill and patience, Netzer and his colleagues painstakingly pieced the structure and the three sarcophagi back together.

Once they had done so, they noticed something immediately. Although Herod’s tomb would have been much larger, it was strikingly similar to the so-called “Tomb of Absalom” in Jerusalem. Others noticed it as well.

In 2013, Professor Gabriel Barkay, one of the world’s leading authorities on the archeology of Jerusalem and the burials and burial customs of the ancient Hebrews proposed that the similarities were no coincidence. He suggests that the “Tomb of Absalom” was deliberately built to look like Herod’s tomb at Herodium. Further, Barkay suggested that “Absalom’s Tomb” was most likely the tomb of Herod Agrippa, the grandson of Herod the Great. 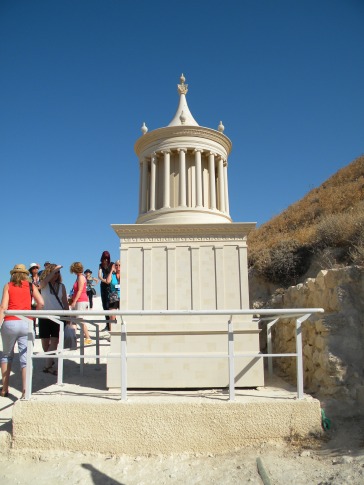 Model of Herod the Great’s Tomb at Herodium. 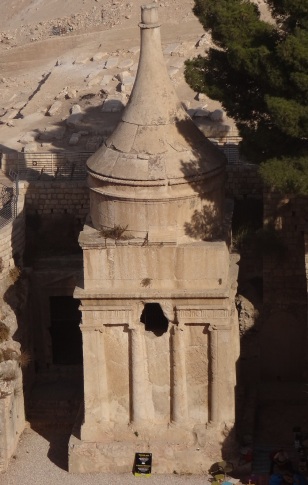 The Mystery Tomb in Jerusalem.

Herod Agrippa is known to Bible students as the king who had James the Apostle put to death and the Apostle Peter arrested (Act 12: 1-3). Acts 12: 21,22 records the circumstances of Herod Agrippa’s own death, “Herod clothed himself with royal raiment and sat down on the judgment seat and began giving them a public address. Then the people who were assembled began shouting: “A god’s voice, and not a man’s!” Instantly the angel of Jehovah struck him, because he did not give the glory to God, and he was eaten up with worms and died.”

Josephus records the same event, “..he put on a garment made wholly of silver, of a truly wonderful texture, and came into the theater early in the morning. There the silver of his garment, being illuminated by the fresh reflection of the sun’s rays, shone out in a wonderful manner, and was so resplendent as to spread awe over those that looked intently upon him. Presently his flatterers cried out, one from one place, and another from another, (though not for his good) that he was a god; and they added, “Be thou merciful to us; for although we have hitherto reverenced thee only as a man, yet shall we henceforth own thee as superior to mortal nature.” Upon this the king neither rebuked them nor rejected their impious flattery… A severe pain arose in his belly, striking with a most violent intensity… And when he had been quite worn out by the pain in his belly for five days, he departed this life, being in the fifty-fourth year of his age and in the seventh year of his reign.“

Yet in spite of the ignominious circumstances of his death, Josephus portrait of Herod Agrippa is one of a pious and observant Jew who was generally well liked. In spite of this, history is silent on the subject of where Herod Agrippa was buried. This brings us back to Gabriel Barkay’s theory that the so-called “Tomb of Absalom” was in fact originally the tomb of Herod Agrippa.

The first line of evidence for that theory is that the monument appears to have been deliberately styled in the manner of Herod the Great’s tomb at Herodium. As unpopular as Herod the Great was, why would you model your tomb after his unless you wanted to emphasize your family connection as if it establish the legitimacy of your rule? That rules out most of the population except noble descendants of Herod, like Agrippa I.

Herod Agrippa “Prutah” coin with three sheaves of grain on the obverse, a conical royal umbrella on the reverse.

Secondly, the proximity of the monument in respect to the great Temple of Jerusalem is noteworthy. No other large funeral monument on the Mount of Olives is so close to the Temple. Many Jews believe that the resurrection of the dead will begin on the Mount of Olives when the Messiah comes. The size and the elaborate nature of the “Absalom” monument indicates that its inhabitant was both noble and wealthy. The location of the monument suggests that the inhabitant was also pious. That rules out much of the family of Herod, excepting Herod Agrippa I.

Finally the survival of the monument is noteworthy. When the Romans conquered Jerusalem in 70 C.E they destroyed Jewish monuments and buildings, most famously systematically dismantling and destroying the Temple (Matthew 24:1,2).  For example, the Romans seem to have deliberately quarried the area where the Kings of Judah were buried. What accounts for the Tomb of Absalom’s survival? Perhaps its inhabitant had been a well known friend of Rome, like Herod Agrippa?

So is the mystery solved? No, and it is not likely to be barring some important new discovery. The case for Herod Agrippa  is strong, but circumstantial. It is compelling but does not meet the burden of proof beyond a reasonable doubt. The owner of the tomb remains unknown, but who doesn’t love a good mystery?