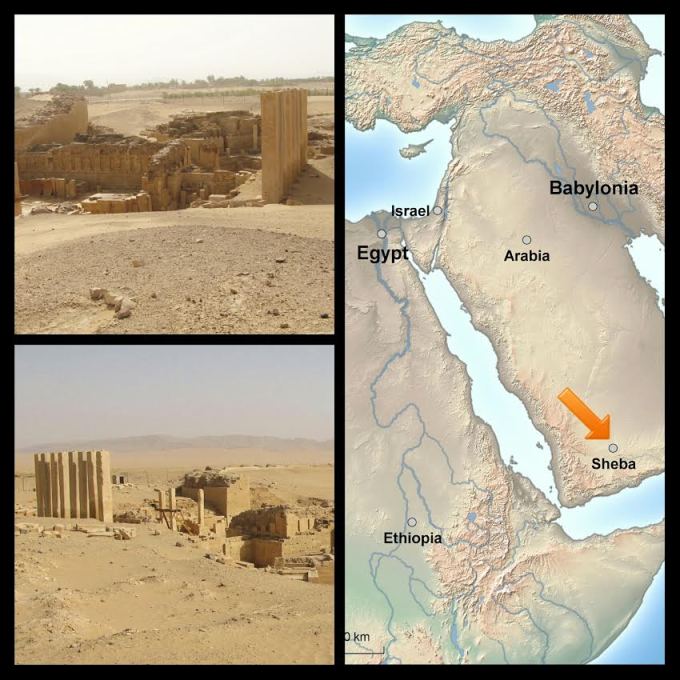 Where was the land of Sheba? The wealthy kingdom from which the famous queen journeyed was almost certainly located in southern Arabia, primarily in Yemen with colonies along the western coast of Arabia and across the Red Sea in Ethiopia and modern Eritrea. The Kingdom of “Saba” (spelled “Sheba” in Hebrew) had the city of Marib as its capital (ruins pictured above). Archeological work has been limited, but what has been done shows that the Sabaens were wealthy and sophisticated. For example they built a massive dam between two mountains that allowed them to capture periodic monsoon rains and irrigate the land around their capital. The dam is considered one of the engineering marvels of the ancient world and stood for almost 2000 years! The Sabaens were primarily peaceful traders specializing in spices, frankincense, myrrh, ivory and gold and they transported these products and others in long camel caravans. This is exactly the picture painted in 2 Chronicles chapter 9. Since the queen mentioned goes unnamed in the Bible, it is currently impossible to identify her. Interestingly in 2012 a British archeologist named Louise Schofield discovered in Ethiopia the entrance to an ancient Sabaen gold mine. Could this be the source of the gold the Queen of Sheba gave to Solomon? #weeklybiblereadingarcheology #biblereadingarcheology #biblereadingarchaeology